Intelligence Agency Report by Drake:
The world is relatively at peace…except for the occasional demon that slips through the demonic realm and into our world to cause a little chaos. They don’t last long, though, because Dante is back for more demon hunting, a little debt, more pizza and strawberry sundaes, as well as a few new friends and some old acquaintances.

“Controversial” is a good word to describe many anime based on video games and vice versa. The Devil May Cry animated series is no different, and with good reason: the video games are an especially beloved series among gamers. For that reason, this anime has its share of love/hate fans, just like any other—the only difference is which side of the fence you personally fall on. The characters are a little different, and unlike the video game version, the plotline isn’t one solid hate-fest on a particular demon and his armies (e.g., Vergil, Mundus, and the Order of the Sword).

Speaking of the plot…what plot! Each individual episode (for the most part) builds its own storyline, and these quite often revolve around Dante’s attitude, his relationship (if you can call it that) with Trish, or his constant debt to Lady and the frustration it causes. Over the course of twelve episodes, you get a handful of individual mini-stories, which is a plus when you just want a short series to amuse yourself (or to enjoy Dante’s almighty badass-ness). That said, the final three episodes remain stand-alone stories while also tying themselves into the whole of the series, which leads up to a pretty vicious demon that tests even Dante. I found each individual episode to be unique, and it is nice that, of any episode, the longest hack-and-slash (or shoot-‘em-up) scene might last all of five minutes. This series clearly isn’t focused on blood, guts, and gore, but on actually telling stories and explaining them. The only real downfall is that the anime doesn’t take greater advantage of the video game series; it brings back only two major characters—Trish and Lady—besides Dante himself. It would have been nice to see more of the supporting characters, especially given the references to Dante’s parents, Vergil, and Dante’s defeat of Mundus. Also, it sucked not to see Devil Trigger, or even the Ifrit gauntlets or Alastor of the first game.

The characters themselves help to move the story along, and two of the three characters retained from the game series remain true to form. Dante’s cocky and carefree attitude continues to show in his dealings with everyone; he is searching for a challenge, and he quickly dispatches just about every demon he meets. Trish remains the destructive demoness that the fans know and love, although with less impaling-Dante this time. In regard to Lady, however, the ball was dropped; in this series, she’s a pest as opposed to a woman on a mission, out to slaughter all demons.

The anime series also introduces a handful of new characters who add their own spark to the series. Morrison is Dante’s agent, out to help Dante get jobs and dig himself out of debt. The man must have the patience of a saint, because no matter how much money Dante pulls in, he always squanders it, despite Morrison’s hard work. Patty is a young orphan who becomes Dante’s charge in the first episode, when he becomes her bodyguard. Even after the job is finished, she continues to hang around Devil May Cry to clean the place and be close to Dante, who she has bonded with and almost sees as a brother. The final addition is Sid, a mysterious demon with his own agenda, who Dante has yet to put a bullet in despite having plenty of clean shots.

There isn’t much to say about the audio and visual for one reason: they’re good. There is no better explanation. The soundtrack is wonderful, and it makes the series progress nicely, both in and out of combat. At times, the audio can become very muted, but it isn’t worth raising the volume, as this only happens in a few rare instances and usually picks back up very quickly. The visual is just amazing, and the animation style is nice and sharp, with very good contrast and detail.

Despite the controversy surrounding it, this is a very good anime that doesn’t fail to deliver on the fun of the Devil May Cry video game series that fans have come to love. The characters are interesting and show depth, while the visual style of the series keeps your eyes glued to the TV. Stories don’t become boring and repetitive, and overall it’s definitely a series worth renting for a day and enjoying. 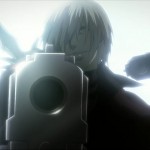 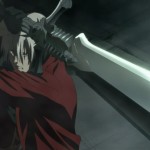 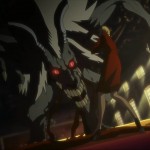 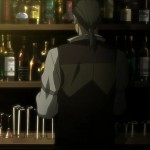