Commander Shepard has saved the galaxy from Saren, Sovereign, and their Geth army.  But it doesn’t take long for a new and deadly enemy to arrive, decimating Shepard and the Normany immediately.  The battle ends in Shepard’s death.  Yet not all is lost, as Cerberus, the shadow organization that believes in the preservation and advancement of the human race, revives Shepard and gives the Commander a second chance.  It’s time for payback as an old enemy rears its head again.

Mass Effect 2 (ME2) is the sequel to the popular and controversial (alien sex, controversial?  Get over it!) Mass Effect (ME).  The Geth horde, Saren, and Sovereign lie defeated at Commander Shepard’s feet.  But how Shepard got there and what is done in ME2 will be completely up to the gamer.   Yes, Bioware employs the importing ability to continue the story of Commander Shepard, much in the way that gamers were hoping for, with even further-reaching impacts in the future of the series.  This in itself will push gamers to want to play again and again to have different experiences and different outcomes.  For those that are playing on the PlayStation 3, this can be bad news if ME isn’t on their system, but there is a DLC that will allow the player to have a “comic book” that allows them to make the choices of ME that will carry into ME2.

Importing your character isn’t the only option, as you can just start a new ME2 game with the canon story being the death of Wrex, the Council being left to die by Admiral Hacket, and several other decisions that the gamer will discover along the way. Gameplay is much the same as in ME except that it has been simplified.  Combat controls are the same and the methodology is no different:  take cover, shoot, and kill.  But ME2 brings recharging shields and health for you and your party members.  Plus, upgrading weapons and talents (which are now MUCH fewer) is much simpler.  Gameplay felt very fluid and was streamlined with the needs of fast-paced combat in mind.  One aspect that’s added to the game is searching planets for resources and missions in order to build up your armory and upgrade your weapons.  The downside to this is that the process is painfully slow and tedious, often resulting in several hours of gameplay used up just rhythmically scanning planets.

Characters in this game are well-conceived, and, as typical with a BioWare game, each has their own desires, goals, and moral standards.  Unlike Dragon Age where party members can just give you the finger and leave, party members in ME2 stay with you and don’t much care (outside of dialog) about what you do other than when it comes to their loyalty and scratching their back for it, with exception to one character (no spoilers here).  It becomes a balancing act of making certain party members happy with one another, and can even affect their loyalty to Shepard, which is a major part of how the game plays out.  Otherwise, it’s all about either being the ultimate angel (Paragon) or badass (Renegade) that you wish to become.

Graphics and audio in this game are amazing.  The graphics are among the best in modern consoles when cutscenes and videos are used, and gameplay graphics were phenomenal.  Sound quality fit for what they intended, but occasionally talking volume seems to have been sacrificed in heavy data areas where the graphics may have been overdone a bit.

As for the plot: let’s just say it’s more interesting than the Illusive Man and that the gamer will enjoy every angle that is thrown at them and go begging for more of the story line.  Buy, don’t rent.  This one is very much worth keeping. 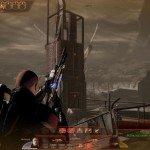 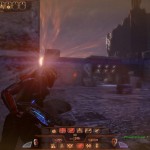 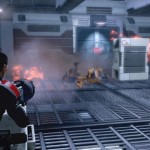 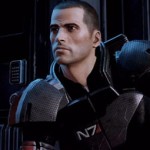