Over the years I’ve been to many conventions, and have had staff from Anime Secrets attend numerous others beyond my reach. In this time I’ve noted a trend that many of those on staff here and even those from other groups each have a favorite convention. It may come as no surprise to you that I have also fallen in love with one particular convention. If you’ve read my previous works, you would know that MechaCon is probably my favorite convention. I’ve attended the past seven years consecutively and loved each and everyone for various reasons, ranging from meeting certain guests from the industry, fantastic staff, top notch organization, and equally awesome events throughout the weekend.

If I had to pick one trait of Mechacon that I love more than any other, it would be their ability to be ready for anything and overcome challenges. In their first year, they were unfortunately on the same weekend that Hurricane Katrina ravaged South Louisiana, and from what I understood the staff went above and beyond the call of duty to help the attendees in their trying time of need. They also came back the following year stronger than before and pulled off a great follow up year which resulted in four more amazing years in Lafayette before the move to New Orleans. If you read my article on Year Six, you would know I had my concerns on moving cities, but again the convention persisted and amazed all!

This year tragedy struck South Louisiana again in the form of Hurricane Isaac one week before the convention was to take place. Due to the hurricane, the size and offerings in the dealer’s room and artist alley were diminished. More on the dealers and artist alley rooms will be covered in Nikkz’s report of the con later. Taking into consideration the passage of Hurricane Isaac, this year was still really great aside from a few hiccups. As per the norm I managed to arrive to the convention late Friday afternoon just in time to attend the Formal Dinner/Opening Ceremonies with Nikkz and a few friends. The dinner menu this year was identical to that from the previous year, which was still a good menu, however many of the attendees, myself included, agree it might be worthwhile to switch it up next year.

In light of the upcoming presidential elections later this year, the MechaCon staff decided to let the dinner attendees elect our own King of Anime. Our choices? None other than Ed Elric (Vic Mignona) and Allen Walker (Todd Haberkorn)! Both candidates engaged in a debate on stage – in similar fashion to our national presidential debates – moderated by Mr. 007 himself, Richard Epcar! The debate was absolutely hilarious and well worth the price of admission of dinner, despite starting twenty minutes or so later than expected due to some technical difficulties. This had the effect of giving attendees a period of time to either be solicited by the candidates walking around for votes or wait around hoping the event began soon, again well worth the wait! However, I am sorry to report our video of the debate did not come out too well, and regrettably we cannot publish it.

Following dinner was the yearly Meet and Greet with the guests of honor for this year, which is always one of my favorite events at con. Spending time with the ever hyper Samantha Inoue-Harte, and the charismatic Todd Haberkorn was really fun, and that experience alone should urge all prospect attendees for future years to consider purchase of a gold pass.

One of the biggest draws for the crowds to attend Friday evening this year was this year’s newest addition, The Grand Galloping Gala. The Gala was basically a Red Carpet formal dance event.; I was pretty excited for this event despite not caring too much for the My Little Pony fandom- where the event title originated. Despite excellent dress code policing and really fun paparazzi stand stationed with photographers eager for your picture outside the dance hall, this event was a fun for a the first few songs but after a while I began to grow restless with the music selection. I’m not sure where the miscommunication occurred, but in my mind I expected formal dancing to music appropriate for such an event. Instead the music and atmosphere was akin to a typical high school dance. Looking past the fact this was a formal event, many of the other attendees seemed to be having a good time, judging from their reactions. Which is fine, I am not the world’s biggest dancer to begin with. I excused myself early and thank heavens, because I discovered a more then suitable replacement event: The Over 18 Anime Blooper panel hosted by Richard Epcar. I highly encourage attending this panel next year, or the next con Richard offers this panel at. It’s truly an amazing session with more laughs than I knew what to do with. In fact, there are a few other panels similar in nature that I attended this year that I highly recommend attending. In addition to Richard Epcar’s Over 18 Anime Bloopers, be sure to check out the Over 18 Dating Game and TMI panels, I promise they are very much so worth the time. I had never laughed so hard in my life.

Now I realize the aforementioned panels were all for adult crowds. For younger audiences, there were a great assortment of panels, ranging from Vocaloids, Homestuck, and Disney Q&As. There were even a few panels by the guest of honors on their careers. I personally really enjoyed the Power Ranger Panel by the legendary Jason David Frank, The Original Green Mighty Morphin’ Power Ranger. I’m excited to see if Jason and MechaCon can work together to bring more of the Rangers cast down next year for the twentieth anniversary while still maintaining a good balance between the Power Rangers fandom and the overall anime fandom. In addition to a wide range of panels, MechaCon boasted a very well stocked and organized 24-hour video game room which had a great system this year where one could rent controllers for the room for the small price of leaving a valid photo ID with the main desk. Let’s just say I caught up on a lot of Super Smash Brothers Brawl in my down time at nights.

There also was the annual Saturday afternoon Cosplay contest, which never ceases to amaze me with all the amazing cosplays created and crafted. The amount of time, detail, and effort poured into these cosplays displayed for all to see on stage was amazing. Especially this year! I am also very excited and pleased with the minor tweaks in the contest to have two levels to compete in, one for novice/beginner cosplayers and one for advanced cosplayers. The distinction between the two came down to had the entrant won an award at a previous convention (MechaCon or otherwise) or not. This made all the difference in the walk ons component, which was a blast. However I wish the same were true for the skits. Aside from one amazing performance with an animatronic GLADoS, the rest of the skits were very unmemorable this year, consisting mostly of dance skits, though that fact was not a fault of the con or staff, but the entrants in general.

This year, there were two events that truly made this MechaCon experience truly special to me. The first being a small panel entitled Cosplay: After the “Play”. This panel was a true gem among the panels, though unfortunately not as well attended as it should have been. The topic of the panel was a sociological open forum discussion on how cosplay affects daily life, how cosplayers live and act after a convention, and resources on how to keep in touch with the cosplay community through meetups and online interactions. For me this panel was both really fun and informative as I am fairly new to the cosplay community and before this year had never placed a lot of energy on cosplaying, so found the questions raised interesting. The panelist, Mehan Chan, was amazing at keeping things interesting and on track. I hope to see her return next year for a part two. The second major highlight of the convention for me was being introduced to the musical guests for this year, Eien Strife. When I first read about them I honestly discarded them as not a major priority. However that was a big mistake! After wandering in aimlessly and seeing the band play Saturday night, I was hooked. For those that don’t know, Eien Strife is a rpg based band; they are role playing characters they created in a fictional world and tell their tale in song. Their music is phenomenal. I’ve had their CD for roughly three months in my car now, and their music just never gets old to me.

Overall, despite the hurricane’s impact on the convention, this year was a great time. This convention has always held a homey vibe while holding to the upmost professionalism in operations, with an amazing staff that exhibit both above mentioned traits. The congoers by and far here make up an incredible community that I am blessed to be a part of. I look forward to next year, and excited to see what they have in store for us this time! 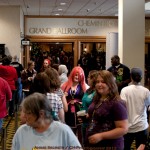 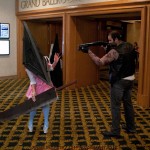 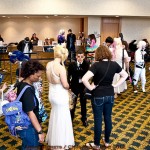 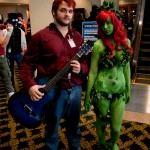 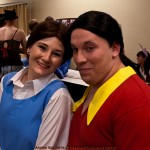 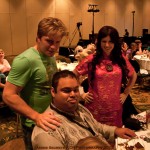 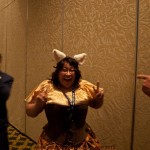 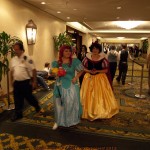 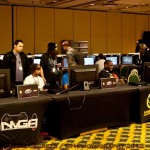 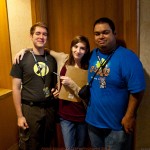 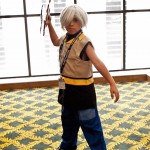 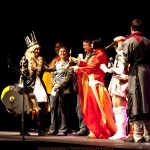