Alternate English Title:New Mobile Chronicle Gundam Wing
Japanese Title: Shin Kidousenki Gundamu W
Also Known As: Mobile Suit Gundam Wing, Gundam Wing, Gundam W, Wing, GW
Genre: Action/Drama
Format: 49 Episodes
Allegiance: Sunrise/Dentsu Inc./Sotsu Agency
Director: Ikeda Masashi
Vintage: 1995 – 1996
Intelligence Agency Report by: Kuzu Ryu Sen
The year is After Colony 195, and man has established large orbiting space colonies around the Solar System. However, the colonies are under the chafing control of the Earth Alliance, a political and military organization that rules with an iron fist. Brought to the breaking point, the colonies have sent five large powerful humanoid robots termed “Gundams” to topple the Earth Alliance. Relena Darlian, returning to Earth with her father, happens to witness one of these robots as she re-enters the atmosphere. By coincidence, she happens to meet the pilot while she is strolling by the beach, and to make matters more complicated, the boy, who calls himself Heero Yuy, has just enrolled at her school. Attempting to get to know the mysterious stranger, Relena attempts to invite Heero to her birthday party – but she is sharply and bluntly rebuffed. Who is this boy, and what is his agenda?

Back during the old Toonami era, there were a few anime titles that stuck out to me as really good and served as my gateway into the anime world. One of these series was Gundam Wing. While growing up I enjoyed this anime quite a bit, but looking back I have to marvel at how time can change one’s perspective.

During a recent viewing of Gundam Wing I began to find flaws, plot holes, and things that just didn’t make sense. First of all, the amount of time spent on political philosophies and debating was pretty tiring and makes me wonder – why even discuss peace if the next scene is a yellow ball of an explosion marking the death of an opponent? Watching Relena spend what felt like an eternity going on and on about peace just hurt, and her very existence annoyed me to no end. It also did not help that most of the plot was very predictable or watered down by weak characters.

Now, if memory served me correctly, characters normally go through changes and evolve as life-altering events occur. For instance, learning the man you knew as your dad was killed and wasn’t really your father to begin with SHOULD incite emotions of some kind, most likely the will to see those responsible killed in a very painful manner. Not with Relena – she felt none of this, and instantly lept to fill the shoes of her birth father and begins spouting his pacifist ideals. Also, just to be clear, learning your brother is alive and an enemy to your ideals should not be met with a heartfelt request to his subordinate for her to take care of him, as you love him deeply. It should cause confusion, denial, or some other sort of heightened emotion. Again, not Relena. She just does not seem to have realistic emotions.

Sadly, the other main characters are worse. At least Relena has a few changes that try to evolve her character (Emphasis on try). The five Gundam pilots don’t change even one single bit, thus making them irredeemable bishounen for the yaoi fangirls to do with as they please. Some say the supporting cast is more interesting than the main cast, and I don’t even agree with that. Their screen time doesn’t allow sufficient time to be interesting. The characters just fail to be more than eye candy.

Speaking of eye candy, by this point the obvious conclusion about this anime must be that the fight scenes made up for a stiff plot and horrible characters. To be honest, it didn’t. The animation was actually lacking in engaging battles. At the end of each fight the mechs were simply engulfed in a yellow ball of light indicating an explosion. After a few dozen of these, it gets a bit boring and repetitive.

The only redeeming factor in Wing is probably the amazing opening songs, “Just Communication” and “Rhythm Emotion,” by Two-Mix. I love both of these songs, and listen to them pretty often. Too bad it wasn’t enough.

All in all this anime only serves as nostalgia for those who were brought into anime by the Toonami block in the 1990’s and early 2000’s. Otherwise, if you’re looking to get into the Gundam world, look elsewhere. I hear SEED  or 0080 are pretty good! 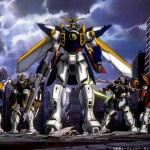