When I first heard about Tengen Toppa Gurren Lagaan, I was told this was the anime to end all anime. No other anime would ever topple this one in sheer brilliance and awesomeness. However, despite the number of positive and over the top reviews I was given by numerous sources, I just could not see how this anime could really be that phenomenal, given past experiences with other anime that would supposedly take the number one slot in my anime top ten list. *cough*Grave of the Fireflies*cough* Boy was I wrong…

One of the things that instantly struck me about Gurren Lagaan was its characters, and just how far they were taken, from a typical cookie cutter set into real breathing character with actual dimensions. Take for example, Kamina, who, in my honest opinion, was the most glorious and magnificent character I have seen in an anime in a very long time. With his optimism and self confidence he was able to motivate everyone, even the viewer in terms of keeping them watching, with phrases like ‘Who do you think I am?!’. To draw together everyone, both in the anime and beyond the screen like this is an amazing feat. Then there is timid little Simon, who, from being aan nobody insignificant digger in an underground village, pushed through to become a legendary warrior of mankind. Trust me, the evolution from a quiet and shy little boy into the leader of the resistance fighters against the beastmen was not a simple task. Simon truly, emotionally, grew in front of the viewer, from a boy into a man.

As far as the plot goes, this anime is pretty straightforward – save mankind by defeating enemies in mech suits by piloting other mech suits. Sounds like your run-of-the-mill story, right? Nope. Try again. The plot, while straightforward, forces the viewer to suspend rational belief, and just accept everything for what it is. (Especially during the finale fight in episode twenty-seven; dear god, was that an insane fight of even crazier proportions.) But due to the way the series flows, even the craziest of moments will seem acceptable to a viewer as the adrenaline continues to pump.

So you must be wondering, how was this all possible, making such an amazing series? Well, besides the epic scale of the battles, amazing characters, and unbelievable plot, the two biggest key elements are the soundtrack and animation. The animation was slick, gorgeous, and full of beautifully colored and detailed scenes. The soundtrack, I can’t find appropriate words to describe. Even after finishing the anime, I still get chills hearing Iwasaki Taku’s“Libera me” from Hell. Any composer able to mix opera and rap (the latter of which I’ve despised all my life) and end up with something this beautiful has my deepest respects. While that was the prime song of the entire series for me, every other song in the OST was equally phenomenal and fit incredibly well into the series.

Needless to say, I must impress upon everyone who comes across this review, if Niner‘s review above wasn’t enough to convince you to see this anime, then I will once again stress that this is one anime for the books. I’ve never been so moved by an anime to the point of tears of both sadness and happiness, and I can barely remember the last time anything pumped me as much as Tengen Toppa Gurren Lagaan, anime or otherwise to the point of actually needing to scream out ‘Roh Roh Fight the Power!’. So again, do yourself a favor and heed my words, and if you don’t, well simply, ‘believe in the me that believes in you’ to make the right choice. 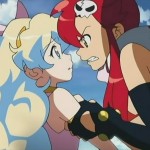 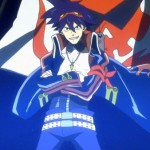 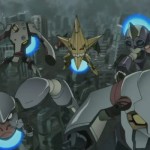 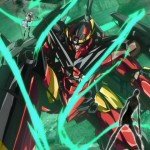