There once lived a young princess in feudal Japan who possessed the power of the Koihime beam. With it, she could make anyone fall in love with her for a short period of time. Anyone except for her bodyguard Shiro, that is. He must have really hated her to be able to defy the power of the Koihime beam! Yet he was the one that the princess loved the most. So even though he hated her, she couldn’t help but to run away from her arranged marriage and follow Shiro far away from the castle. It did not take long for her to realize just how foolish her actions were, but perhaps her journey really did end up being worthwhile…

Koihime Soushiis much shorter and its storyline is very different than much of Koge-Donbo*’s other works (Pita Ten, Di Gi Charat Nyo, amongst others). However, the manga retains her usual cute style and superb and moving storytelling ability.

Koihime Soushibegins with the typical love-struck girl, but it soon sets itself apart from other romance manga with unique adventures and an unexpected ending. The princess’s adventures as she follows Shiro are all quite entertaining and exciting, although there was one with a thief and a geisha that was a little weird. Nevertheless, their tale did provide the reader with an outlook on another misfortune of loves in feudal Japan. It is clear that the history behind the setting of the manga was thoroughly researched, and I really enjoyed reading a manga that captured the essence of feudal Japan so well.  The short manga contained in the back of the volume also set in feudal Japan, “I Want to Return to that Day” is just as well-depicted and has a humorous spin on a common complaint.

The most essential characters are, of course, the princess and Shiro. The relationship between them is so simple and believable. They grew up together; it is only their differing positions in feudal Japanese society that set them apart. Their personalities are perfectly depicted as a maturing princess and emotionally-dulled yet gentle bodyguard struggling to fulfill the duties of their era when faced with the conflict of desire. Her kindness is admirable and Shiro’s mystery and ways of speaking are to die for; he is cold like a ninja, yet he lets just enough warmth through to make you want to know more. The kunoichi (female ninja) girls have very suitable personalities for their place in the story as well. I found them both interesting and entertaining. The adults are mostly serious and constantly urging the princess to fulfill her duty in marrying. The scenario behind the way their duties bind the characters is almost flawless.

Unlike most romance manga aimed at teenagers, the ending of Koihime Soushi is so realistic. I don’t want to give it away, but I will say that the ending is not “and they all lived happily ever after.” It’s not terribly sad, but it’s a realistic depiction of the way love was viewed, especially in respect to one’s duty. It really opened my mind and allowed me to feel a little of what a lover might’ve felt in the days of feudal Japan. The ultimate message can still apply to star-crossed lovers of today in a broad sense.

The artwork of Koihime Soushi strongly reflect Koge-Donbo*’s admirable capabilities. Her young girls are extremely adorable and Donbo*’s unique style really thrives through them. Shiro is also very well-drawn and gives off a good mysterious vibe. While it is apparent that much time went into designing her main characters, I’m afraid that very little went into some of her more minor characters, as there is some awkwardness in them, especially in the thief. However, the backgrounds of her panels are often very detailed, and the few colored pages are vibrant and unified.

Overall, Koihime Soushi is a fantastic manga, especially if you’re looking for something short or are a Koge-Donbo* fan. It has an exciting plot with a wonderful depiction of feudal Japan, great characters, an astounding message, and fabulous artwork. It’s one of my personal favorites. 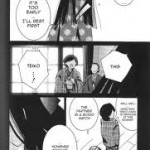 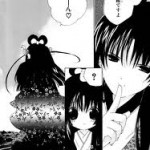 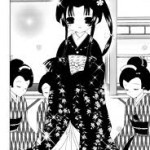 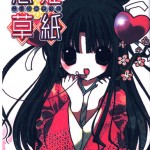