There is a lot riding on this latest batch of episodes of Captain Earth, now that the second act is in mid-arc. The antagonists, having suffered major defeat by the newly-minted Midsummer’s Knights team led by “Captain Earth” Daichi, now seek to increase their own ranks by awakening more Kiltgang. Each episode introduces a new antagonist, as well as new challenges that put the heroes to the test and allow their individual skills to shine.

Episode 8 opened up with Amarok and Malkin finding themselves land-locked without their functioning Goodfellow Machines for the time being. They began their contingency plan by seeking out their first new recruit, a Kiltgang named Zimbalt, while Daichi’s team tried to locate him and his Goodfellow first. Globe’s “Ordinary” mecha series – smaller land/air versions of their hulking space robot counterparts – were used to engage the Kiltgang before the awakened designer children could teleport into space and attack with their more formidable Orgone-powered avatars. With less than a minute to spare, Daichi brought Zimbalt’s mecha down after discovering its weak point, forcing a retreat. The next episode followed the Knights tracking down the next Kiltgang, Aitair, but once again failed to reach her before the antagonist could.

Worst still, Akari was kidnapped and forced to direct her hacking abilities against her own team. Daichi was in an equally precarious situation, coming face-to-face with Aitair’s artillery-based mecha’s deadly firepower. In the end, Daichi’s perseverance snatched victory from the jaws of defeat in an incredibly memorable scene of first-rate badassery. Akari managed to free herself from her captors when she used her tech skills to hold the Kitgang’s coveted Orgone supply (i.e. humanity itself) hostage in exchange for her life. The third Kiltgang, Lieban, was quickly awakened at the beginning of Episode 10, who decided to taunt Daichi some before joining up with her Goodfellow to face him in underwater combat. But the Captain was no match for the crafty, swift Kiltgang, who succeeded in transporting into space. Teppei, who up to this point had questioned his usefulness, was now allowed to shine in his new mecha, the Nebula Engine. He succeeded in bringing down Lieban in spite of her speed and illusions, thus repelling the invasion once again.

I thoroughly enjoyed watching the sharp contrast between the more innocent protagonists and the Kiltgang designer children who have been hardened with lifetimes of witnessing some of the worst aspects humanity had to offer. It made some of these villains very relatable to viewers, even if their Kiltgang transformations made them out to be psychotic space vampires (which for all intents and purposes, they are). It doesn’t hurt either that the new launch sequences have started to grow on me, and the visuals are still as good as they always have been. Captain Earth is finally really taking off, and I’m actually looking forward to seeing where the series will take me next. 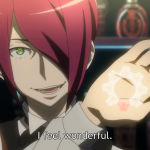 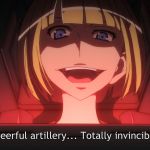 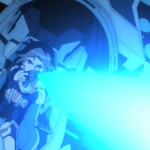 No arms? No guns? NO PROBLEM! Open-Cockpit Laser Blast of Justice! 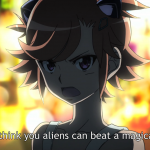