Because You Smile When I Sing is a collection of five short stories by Natsuki Takaya, the creator of Fruits Basket. More specifically, the collection contains four dramas-Because You Smile When I Sing (a light love story about two teenagers who are picked on for how they look), Ding Dong (about how a girl adjusts to living with her stepmother and her father’s death), Voice of Mine (about how two talented violinists overcome their classmates’ jealousy and their own lack of confidence in themselves), Double Flower (a tale of how a strange male seamstress finds love; it has a fair share of comedy too)- and one comedy-Dark Princess (a light-hearted parody of Snow White).

The Because You Smile When I Sing collection consists of Natsuki Takaya’s early work. Although it was published after Phantom Dream and Tsubasa: Those with Wings, some of the short stories were written beforehand. That being said, it should not come as a surprise that they are not amazing, but they are not half bad either.

All of the stories are light-reading; I could easily see myself reading them in a waiting room. Since all of the stories are only a chapter long, one cannot look too much into them. A chapter is just enough time to become familiar with the characters, perhaps become slightly moved or entertained with the story, and move onto the next one. Since I am familiar with Takaya’s more recent works, it is very easy to see how her storytelling ability emerged from these early works into what it is today. The dramatic scenes are told in that moving, poetic way, just like the deeper scenes in Fruits Basket are.  The comical ones are full of energy and highly spontaneous characters. However, due to the fact that only a small portion of the dramatic stories actually have rich content-including unique, compelling stories and highly relatable characters-one is only a little touched at best. In addition, the comical scenes can get pretty confusing; several times I had to flip back through the pages to find out what the characters were even talking about – things get insane to the point of nonsense very quickly. Takaya apparently learned to write comedy scenes so effectively through practice. Unfortunately, she was still practicing when she wrote the short stories in Because You Smile When I Sing.

The length of the stories is what hurts the characters; it is extremely hard to create characters that are very relatable and believable in such few pages. Most of the characters are pretty interesting and at least somewhat relatable, but the reader just does not get much familiarity with them. Without that familiarity, most readers will not find them to be much more than average.

Although I stated earlier that the stories are only slightly moving, it is pretty impressive that a chapter-long story can be moving at all. Takaya just has the ability to write emotively. She can grab her readers’ hearts, at least for a moment, even in these short stories. The scenes about how it feels to be picked on and how others can help one overcome it resonate especially strongly; these types of emotions and scenarios get brought back no less relatably in Fruits Basket  (e.g. Tohru’s old middle school days, Yuki’s loneliness when he is surrounded by people because they see him as who they want him to be and not who he is).

Takaya’s early style is still strong, but some of the line details are a bit awkward in some panels. I noticed that one particular character’s eyes were often drawn too large (even for manga); the size of the eyes overpowered the rest of the face to a distracting point. Sometimes the facial expressions are not quite natural; of course, it takes experience to perfect such a fine details, so these blemishes are understandable. I was impressed by her very detailed backgrounds, as new manga-ka usually do not put too much effort into them. I especially liked her cover art for Dark Princess; it has a very successful Celtic beauty. I also found it very fun to look at how some of her early character designs get tied into Fruits Basket later. I spotted a middle school Tohru and young Shigure! J She was able to draw those characters just as effectively then; she already had that unique and beautiful style. It just needed a little fine-tuning.

All in all, the Because You Smile When I Sing collection is a pretty good read, especially if you are familiar with Natsuki Takaya’s work. While the storyline and characters are humble, Takaya’s poetic storytelling ability and gorgeous artwork begins to emerge. 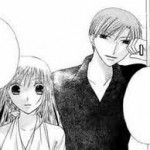 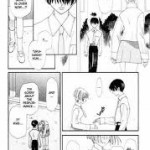 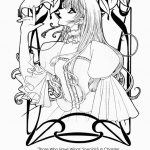 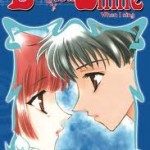