Season Two has so far shaped up to meet the expectations of fans of the series, and then some.  Episode One reinstated Kirino as the eroge otaku that she is, much to the chagrin of a supportive Kyosuke.  Episode 2 was an Ayase-centric story, in which she had to come to terms with Kirino’s eroge obsessions as it related to their long-term friendship.  It was then followed by an origin story of otaku circle leader Saori’s pre-Kuroneko/Kirino/Kyosuke days in Episode 3.  Both were equally entertaining and certainly worth going back to watch once or twice, and are especially recommended for the fans of these supporting ladies.

Without much warning at all, Episode 4 opens up with an explosion of fan-service that would make even the most well-seasoned moe enthusiast blush (or possibly pass out from nasal blood loss), with a force that maintained its steam to the every end of the broadcast.  As things settle down, we find out that Ria, Kirino’s track camp rival, managed to locate her and travel all the way to Japan just to see her again.  She stays over at the house and makes herself at home right away, causing all sorts of mischief for the two siblings while they carry on with the usual business of bickering with each other.  Kyosuke is predictably thrust into compromising positions with the little imp, and subsequently received an extra helping of tsundere-powered abuse from an over-protective Kirino.  The highlight of Ria’s trip came when she was taken to see Akihabara, where she got to see firsthand the source of Kirino’s passionate hobbies.  At the end of the trip, Kirino was challenged to a rematch sprint, so that Ria could find out what gave Kirino the willpower and resolve to finally beat her in that race so many months ago, having lost so many times to the young athletic prodigy.  Kirino revealed that it was Kyosuke who convinced her to be true to herself, when she was on the verge of throwing away her hobbies and passions to focus on her running.  She knew that she would never be as passionate for the sport as Ria was, but it was clear that Kyosuke was the source of her inspiration for her last hoorah before returning to Japan.  Ria left for home after the footrace, satisfied knowing that Kirino’s love for her big brother was the edge her rival needed to overcome obstacles, and to reassert her unique identity within herself.

Overall it was a good episode, if only for the fact that there was plot substance to be found sandwiched between the cream fillings of fan-service and ecchi scenes.  The only complaint could be that Kyosuke didn’t seem to add much to the plot beyond being the victim of slapstick and verbal assaults.  The times that he did contribute, however, were very poignant and reaffirm his positive, kind personality that can easily shrug off Kirino’s coarse behavior and embrace real sibling affection. Furthermore, the surprise cliffhanger at the end will certainly keep the audience talking and speculating for the following week (unless you’re already ahead with the printed series, anyway)

Oreimo Season Two seems to be generally weak in terms of major plot-moving up to now, deciding instead to flesh out minor characters and expand on Kirino’s non-sibling relationships.  The ramping up of fan-service certainly does not help much either.  Fortunately, the art style’s quality has not changed much from last season.  There was a promise of more exciting events in the next few episodes, made in the last few minutes of Episode 4 with a shocking cliff-hanger, so we shall see if the staff is true to its word. 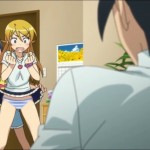 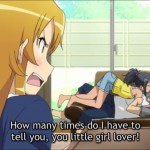 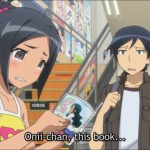 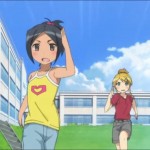