Commander’s Log, Episode 7 of Sparrow’s Hotel. The abnormally large-eyed hotel clerk continues to wreak havoc on Project Spring 2013. There seems to be no end in sight…. logic and any means of storytelling are completely lost… time is running low… the horrors ahead too great…

In all seriousness, this anime is still going nowhere. There are attempts to give a slice-of-life look into working at a hotel, however that slice of life is ruined when, during a crazed week of tourism, a great deal of emphasis is put on Sayuri’s breasts.  There are convenient unintentional runnings into them or some speculation if her energy is derived from said female assets. Then, when the topic of the episode suddenly devolves from the issue of low guest count to how the characters spend their pay checks, Sayuri explains her apartment floor broke from her buying too many weights. Next, with a great deal of whiplash, the episode jumps to Tamaki bribing her older brother into buying her dinner due to her lack of money, and afterwards learning that she gained weight.

Then episode seven occurs, and I let my hopes raise ever so slightly. The episode opens with the hotel undergoing some renovations. Among the construction crew is a man named Billy, who uses special moves to put the bath area together.

First reaction: FINALLY, AN OPPONENT FOR THE ABNORMALLY WIDE EYED ONE!!

Then as he gets ready to leave… she appears and wishes to talk to him. He talks about how her strength calls likewise strong fighters to the hotel. Any second a battle could erupt… but it never does. He just leaves and she let s him… SERIOUSLY WHAT EVEN?!?

Now for the finisher move – there is still plenty of time in this episode left. How is it used you ask?

Not having an epic fight. It’s used on some guy who apparently adores the protagonist and planned to surprise her, only to have his plans foiled by a “Closed for Renovations” sign. The ending credits queue, and there is Sayuri naked in bed for some reason… with a slow pan up from her legs to face… This anime just broke me with its lack of logic or substance… 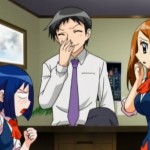 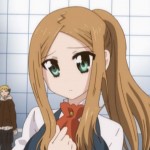