Spring is here, and with a new season of anime comes new a opportunity for growth in the industry. The mecha genre has always been in the periphery of my circles of interest, even while acknowledging its essential contribution to the medium as it exists today. Such definitive shows as Robotech, Gundam Wing, Neon Genesis Evangelion, and Gurren Lagann come immediately to mind. Given the high precedent set by these other mecha shows, I started watching Captain Earth, the latest addition to the genre, with a combination of excitement and apprehension.

Our hero of the day is Daichi Manatsu, a teenager without direction trying to make sense of his past and present. His father, an astronaut captain, died while going into space, but the true circumstances of his death – an heroic sacrifice to repel an invasion from space – have never been divulged to Daichi. Other flashbacks show Daichi as a young child befriending a boy with strange powers (Teppei Arashi) and a mysterious girl while wandering around an abandoned base on Tanegashima Island. These memories have always weighed heavily on his mind, but after witnessing strange rainbow circles appearing in the sky, Daichi resolved to return to Tanegashima to find answers. Inside the empty compound he finds more enigmas: a short-haired schoolgirl guide, frightening visions of an invading force approaching Earth, a gun-like artifact that transports him to a launching bay, and a stern gentleman who asks Daichi if he is a “captain.” With minimal information and no hesitation, the young man takes control of a gigantic mech as it launches into space to intercept the enemy.

The first episode seems to focus more on wowing the audience with grand-scale money shots and style over substance; there’s not very much exposition given here beyond who the protagonist is and his motivations.  The antagonists are briefly introduced, but we don’t yet know what the central conflict is between them and the people of Earth.  There are some indications that there are political conflicts as well, with secretive government agencies and organizations plotting against one another behind closed doors.  On a more positive note, the visuals and music are stunningly beautiful, and there’s appropriate pacing all throughout the episode.  Daichi shows promise as a troubled youth, and his character is taking an interesting direction; his gung-ho determination to seize the reins of a powerful war machine sharply contrasts Shinji Ikari’s dark brooding and Simon’s timid reluctance. This new generation of mecha hero is refreshing and engaging, and I actually look forward to watching more of Captain Earth. 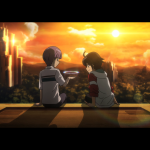 Teppei shares “something amazing” with Daichi 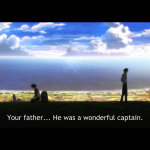 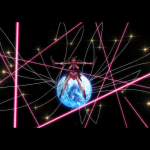 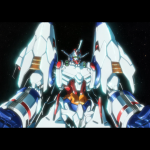 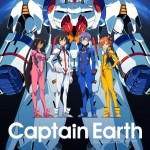