Crest of the Stars by Kuzu Ryu Sen

At the age of 10, Jinto Lin was forced to watch as his father Rock sold out their home world of Martine to the Humankind Reich of the Abh, becoming a traitor and pariah to the populace as a result. In return, Rock became the new magistrate of the star system, and as his son, Jinto became Abh nobility. After seven years of learning the “Way of the Abh,” Jinto is ready to journey to the Abh capital Lacmhacarh to serve his mandatory term in the Abh Star Forces. Assigned to escort him to the capital is a young Pilot Trainee named Lafiel, serving aboard the patrol ship Gauthloth. When the Gauthloth encounters unidentified craft during the journey, Jinto and Lafiel are evacuated as non-combatants for precautionary reasons, and are forced to find their own way to Lacmhacarh.

Because of a promise she made two years ago, 12 year old Kouyama Mitsuki desperately wants to become a singer. However, this is impossible because of a life threatening throat tumour that makes singing or talking loudly very painful. But when the Shinigami duo Negi Ramen tell her that she has only one more year to live, Mitsuki seizes the day and attends the Seed Records New Artists Audition in secret. With a little help, this act starts her on the road to becoming an idol, and puts her closer and closer to fulfilling her promise. 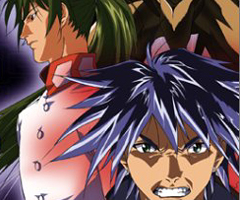 Mizushima Seiji is perhaps the most popular anime director in America right now, despite most of his fans probably not knowing his name. After all, it’s not that often that one of your works sweeps across Japan and America like Fullmetal Alchemist has. Aside from his claim to fame, Mizushima-san has also directed, in some capacity, Neon Genesis Evangelion, Generator Gawl, Shaman King, Slayers NEXT,and Zaion: I Wish You Were Here. One thing can be certain: Fullmetal Alchemist will not be the end to this man’s fame. 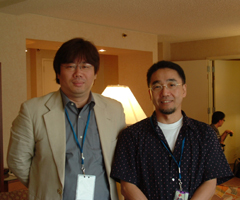 At Otakon 2005, Anime Secrets had the great and unexpected pleasure of being able to conduct an interview with character designers Kanemori Yoshinori and Kawamoto Toshihiro. Profiles of these two esteemed individuals can be found with the transcriptions of their respective panels linked above. This interview transcription includes questions posted by everyone present at the press conference style round robin, not just questions posed by the Anime Secrets representative. 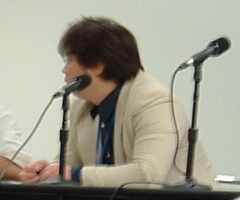 Kawamoto Toshihiro has been involved in the production of some of the most beloved anime that exist. Born on July 15, 1963, Kawamoto-san became an avid Gundam fan, and got his start in the industry at a studio that worked on Urusei Yatsura. Since then, he has been a pivotal part of projects such as Mobile Suit Gundam 0080: War in the Pocket, Mobile Suit Gundam 0083: Stardust Memory, Mobile Suit Gundam 0083: The Last Blitz of Zeon, The Vision of Escaflowne movie, Wolf’s Rain, Golden Boy, and perhaps the most famous works in America:Cowboy Bebop and Cowboy Bebop: Knockin’ on Heaven’s Door. Most recently, Kawamoto-san served as the animation director for an episode of Kurau: Phantom Memory However, his most popular work may be still to come, as he is involved with the Fullmetal Alchemist movie. 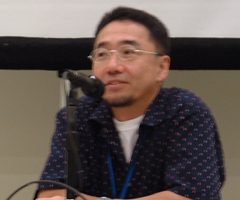 Kanemori Yoshinori has been a character designer for over twenty years now, predominantly working at Studio Madhouse. Debuting in 1985 with Gegege no Kitaro, Kanemori-san has since worked on such projects as Yawara!, Final Fantasy: Legend of the Crystals, the X TV series, and Card Captor Sakura: The Sealed Card. Just recently, Kanemori-san unveiled his debut work as a director: Alexander no Senki (Reign: the Conqueror). Despite twenty years in the industry, Kanemori-san’s career is just beginning, and the anime universe eagerly waits to see what he can do in his new role as a director.

At first glance, one would expect a day with Class 1-3 to be as normal as with any other class. As one walks in the door, there’s the 10 year old genius girl with the pigtails reading. When the bell rings, there’s the screeching of the teacher struggling to make it on time. During class, there’s the tall quiet girl looking out the window at what appears to be a very cute cat-shaped cloud, with another girl staring at her with a red face… Directly in front, there’s the girl from Kansai staring blankly into air. Behind, the two childhood friends are arguing loudly again and whacking each other with their textbooks, but it’s fine because the teacher is too distracted by what’s happening in the class next door. Ah, just another day in the world of Azumanga Daioh.

Aya, Ken, Omi, and Yoji have closed their shop, and now travel across Japan in a trailer that acts as both their home and a moving flower store. During a stop in one city, Omi befriends a girl named Hibana Kaori and her friends. However, soon after that, Kaori and her friends are attacked by an Elite Special Forces squad operating from the United States Armed Forces Base. Once again, Weiß is called on a mission to investigate the attack and how the United States Armed Forces are involved, but will personal feelings cloud Omi’s judgement on this mission?

Following the defeat of Esszett, the 4 members of Weiﾟ all went their separate ways, hoping to live out their lives in peace. However, recent events threaten the stability of Japan once again. The creation of Koua Academy, a government funded elite level school designed to create the leaders of the future raises Kritiker’s eyebrows, especially due to the high suicide level and drastic personality changes among the student body. Once again, Weiﾟ is called in to investigate the mysterious Academy.

Five years ago, just as he was expected to breeze past Sumi Technical School and take Meisei High School to the Koushien, Uesugi Kazuya was killed in a tragic car accident. Two years later, Uesugi Tatsuya, Kazuya’s twin brother, achieved the dream of his fallen brother by guiding Meisei to the Koushien in a stunning victory over the now heavily favoured Sumi Tech. Despite his victory, for Tatsuya, and for his and Kazuya’s mutual childhood friend and love interest Asakura Minami, time has seemed to stand still since that fateful day five years ago. Will they eventually be able to greet the changing of the seasons once again?